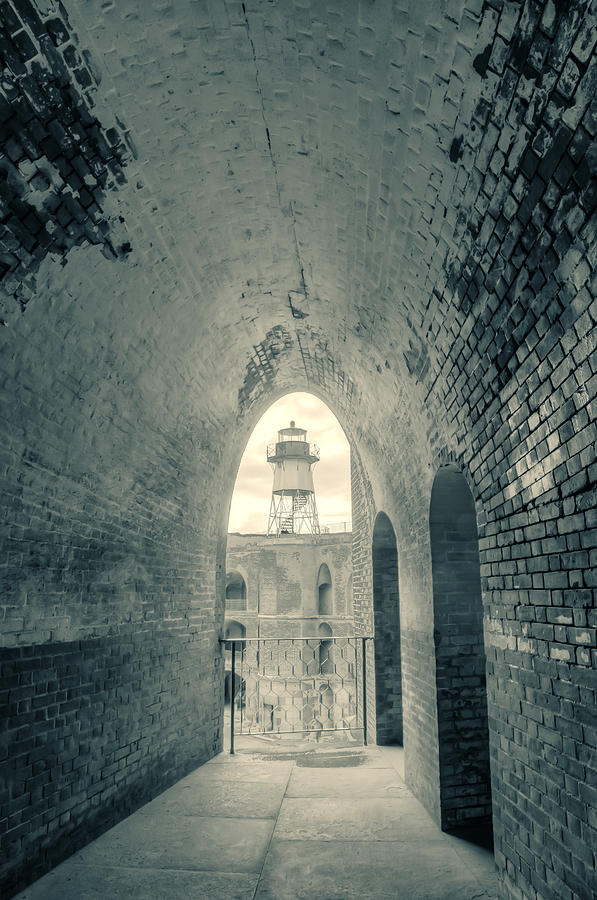 There have been three lighthouses at Fort Point.

The original lighthouse, built in 1853, was a Cape Cod style lighthouse with an integral tower. It stood for only three months, and was never lit. While awaiting the arrival of its lens (from Paris), it was torn down to make room for the Army fort.

The second lighthouse at Fort Point was a squat wooden 36-foot (11 m) tower with four sides that sloped up to a square watch room. It was built on the narrow ledge between the fort and the water. In 1855, the light behind its fourth-order Fresnel lens was lit for the first time. Erosion undermined its foundation, and in 1863 it was torn down to make way for a bigger seawall.

Fort Point�s third lighthouse was built atop the wall of the fort. It was originally a small iron skeleton tower with a fifth-order lens. In 1902, the lens was upgraded to a fourth-order lens, which produced alternating white and red flashes.

In 1933, when work on the Golden Gate Bridge began, a fog signal and navigational light were placed at the base of the bridge�s south tower. In 1934, when the towers for the Golden Gate Bridge were completed, the lighthouse was deactivated. The bridge would block off much of the light from the lighthouse, and as the towers were 740 feet (226 m) tall, they provided a more visible warning for mariners.

Great composition; love the framing! What a history for the Fort Point lighthouses!

Love the framing of the lighthouse by the arch. Your choice of colors are soft and muted, allowing me to look at the details and textures more closely.

I love the texture seen in this photo! Great pic!

Jonathan, Excellent depth to this photo with great details and clarity love the write up also on the history of this photo, G+/T/like and fav

What a wonderful looking presentation!! v/f/t